I was in the middle of tidying up my desktop folders, when I came across the above image, from an assignment Jason (Florio) and I did a couple of years ago. This vista, of the Great Rift Valley,  still has the ability to take my breath away…one of the most enchanting places I have ever been to. So far. I suffer from vertigo too, so I can’t tell you how much convincing Jason had to do, to get me to sit out there on that rock, along with trying to look at ease!

Here’s more from the original post I put on our ‘River Gambia Expedition‘ site:

The things we Florio’s get up to when we aren’t planning a River Gambia Expedition:

Last year, we were very fortunate to be sent on a photo assignment by travel magazine AFAR to Kenya, East Africa and, in particular, up to the Great Rift Valley.  We hooked up with the writer, Matt Gross, when we got up to Iten – which has to be one of the most wondrously, beautiful places I have been to yet.

Matt, a New Yorker, is a keen runner and he wanted to write a story based around marathon runners who train at high altitude in and around Iten, in the Great Rift Valley – less than an hours flight from the capital, Nairobi, to Eldoret, followed by a 30 minute drive to Iten – where the views are truly gobsmacking!

Kenya produces some of the fastest, and finest, runners in the world and one place that many runners, from all over the globe, go to train is in Iten, at the High Altitude Training Centre (HATC) – founded by 4 times World Champion runner, Lorna Kiplagat. Whilst we were staying at the centre, the British Olympic team were also there, in training for this years Olympics.

We got to spend a fair bit of time with some of the local Kenyan runners (who we met through a great local fixer, Alex Matalambut Keles ) – all either top athletes in their field or well on their way to being so. However, there is an enormous amount of competition in Kenya, when it comes to running. Everyone, and I mean everyone, seems to run – from small kids, running to school, to elderly women joining in a half marathon (we followed one, from the back of a truck, as Florio shot) just for the fun of it, running in their flip flops! We watched as one mature flip-flop shod woman overtook one of the official marathon runners in his hi-tec running shoes! 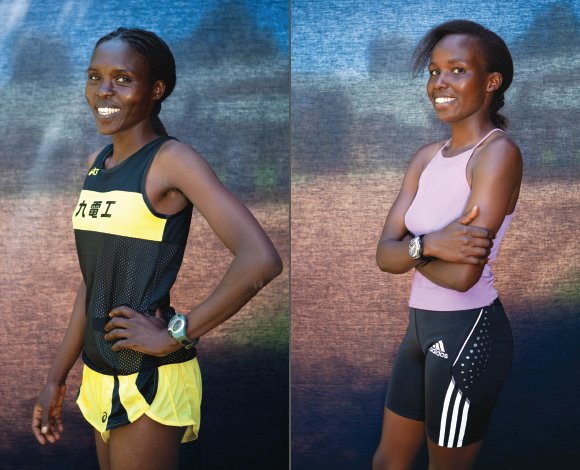 Kenya is definitely on my ‘places to revisit’ list. A remarkable, welcoming, place where firm friendships were formed. How could you not be attracted to a place where people who smile and laugh so much…